Who needs a cat anymore? 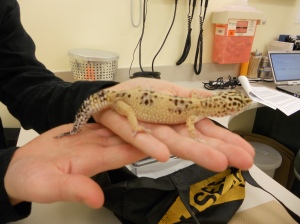 “Ryu hasn’t been eating for three weeks,” sobbed a twenty-something year-old young lady as Dr Jennifer Graham examined the animal. First she shone a flashlight in his eyes, then examined the legs, then the tail and finally his anus. “His tail is so thin, it’s normally as broad as his head,” added the pet’s owner. Dr Graham nodded in quiet agreement and then asked her technician Deborah to switch off the lights in the room. She then picked up the creature in the palm of her hand, lay him on his back and shone the powerful LED flashlight under him. His translucent skin was no match for the powerful light and one could see silhouettes of a heart, liver and intestines. “No. he hasn’t swallowed anything which is obstructing his digestive system, “was the diagnosis of that ‘ultrasonic’ examination.  The lights came on and the tired Leopard Gecko was placed on the examination table as the perplexed doctor drummed her fingers, lost in thought. Perhaps stressed by the physical examination, Ryu, which means dragon in Japanese, excreted a viscous green drop of stool which, when placed under a microscope, revealed a protozoan infection. Dr Graham prescribed a chicken-flavoured multivitamin solution and medicine for the infection while Deborah reassured Ryu’s owner. After they had left, the vet and her assistant quickly returned to the inside office to record the proceedings of the first examination of that morning.

This was the start of a busy weekday at the Avian and Exotic Animal Care Centre at the MSPCA Angell Memorial Hospital in Boston. The hospital website  claims that it hosts two of the 130 avian specialists in the world and is renowned for its range of treatment and therapies. These two specialists along with four devoted technicians form the backbone for running this centre which caters to hundreds of birds, rabbits, ferrets, rodents, hedgehogs, reptiles and amphibians every month. The centre is equipped with general and isolation wards, thermal-controlled reptile and avian incubators and offers surgery, endoscopy, radiology, bloodwork testing, ultrasonography and advanced diagnostics among its range of services along with a day care shelter. The centre’s uniqueness is amplified by the passion and care which the six-member team showers upon their scaly-skinned and feather-covered patients.

The inside office is a fairly large sized room which doubles up as the general ward. Two bunnies recovering from surgery and a bright blue budgerigar who was brought in for regurgitation issues, watch Dr Graham and Deborah, from their respective cages, as they move around the office typing in diagnostics and readying themselves for the next patient. The office cum general ward is startlingly sterile with an air tinged with the smell of fresh lettuce and cilantro leaves. Its white walls are lined with photographs of previous patients, and clip boards with lists and instructions. Dr Graham recalls her experience with Ryu and said that the clinic gets a lot of geckos and bearded dragons. “We used to see iguanas before but not too many anymore cause they’re very big and need humid conditions. Boston is very dry for them.”

The second patient for the morning cancelled his appointment which gave the doctor a window to quickly take a walk into the recovery ward to check on Topo. The scrawny brown ferret stared at the doctor through dilated pupils as she gingerly lifted him from his cage to look at the stitches on his shaved pink belly. “Topo has been diagnosed with a sarcoma tumour on his side and has just come out from surgery.” She went on to explain the nature and dangers of this type of tumour which is characterized by finger-like projections which delve deep into muscle tissue often leaving surgeries unsuccessful as doctors are unable to remove all traces of it at one go. Dr Graham cooed a few consoling words at the semi- conscious ferret and then placed him back into his cage bundling him into a blanket as she did so. “We’ll try laser as the next option to cure his cancer and pray that that works for Topo.”

Meanwhile Deborah was back in the examining room trying to wriggle Toast out his plastic strawberry-shaped house while his owner nervously stood by chewing on her finger nails.

Pet hamsters live to an average age of two to three years and are highly prone to tumours. Uterine cancer is especially common in this breed of rodents. This one-and-a-half year old hamster came with symptoms of a swollen vagina and severe urinary tract infection which immediately put the doctor and her technician on alert. Using a stethoscope, Dr Graham felt around the hamster’s belly for tumours. He didn’t have any but the doctor suggested that they conduct an ultrasound to rule out cancer. She then prescribed a berry-flavoured antibiotic to his owner and worked out a date for the ultrasound. After the owner left she explained that surgeries among hamsters can be very complicated as they often chew on their incision lines causing room for infections to set in. She also added that surgery in such an ‘old’ hamster may not be the best option. The surgeries are expensive and could range anywhere between $150-600 including costs for anesthesia, histopathology and post operative care and when chances of survival are so low, these surgeries often appear to hasten the decline of the hamster’s health.

Deborah said that the clinic saw an increasing number of smaller birds, hamsters and rabbits these days. “Apartments in Boston are small so people find it easier to look after tiny animals.” 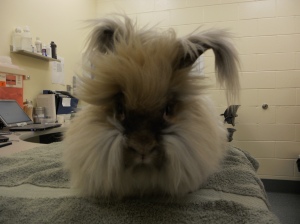 Next, walked in Hobbes. Though his name was inspired by the stuffed tiger-shaped toy in the famous comic strip by Bill Watterson, this Angora Rabbit was far removed from his better known cheeky comic avatar. The vast overpowering bulky grey fur coat enveloping the tiny rabbit within could have left a stranger guessing about the location of the bunny’s face had it not been for his antennae-like conspicuous ears. The one-year old rabbit was brought in by his devoted owners who insisted on being referred to as his parents. Their winter coats, originally black, were covered in grey fur shed by their ‘son’.  His symptoms included an overall drop in energy, an ocular discharge and very flaky fur. The family conglomerated around the examination table as Dr Graham explained her diagnosis. “It’s just the Walking dandruff mite. It’s very common among rabbits,” she said while injecting a vial full of medicine into the nape of the rabbit’s neck. Stunned by the prick, Hobbes jumped off the table and scurried across the floor to hide itself behind the trash can. His large body, which was as big as an average sized Maltese dog, stuck on either side of the can. Hobbes’ mother ran across the room and scooped him up into her loving arms.

As time inched closer to Dr Graham winding up her shift for the day, she flipped over her charts to check for the last patient for the day. Princess Jefferson, a large white male cockatoo, rode into the examination room on his owner’s shoulder. The middle-aged lady anxiously explained that Princess had been obsessively picking out his feathers from his chest for the past week. A bald patch on his otherwise immaculate white body confirmed what she said. His crown rose at the sound of his name and fell again a few seconds later. Dr Graham patiently asked the owner questions about the bird’s diet, sleep cycles, cage, water and toys and asked if any of them had been changed or altered in the past few days. She also checked if the owner had turned on the heat in her apartment and asked her if she had installed any devices to control humidity in the apartment to which the lady frantically answered in the affirmative. After a thorough 20 min- long interrogation about the bird and his owner’s lifestyle, of which no altercation emerged, the doctor suggested that the bird be subjected to a bloodwork sample to check his hormone levels. 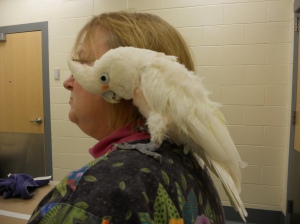 Dr Graham explained, “Cockatoos don’t do very well in cages. They show a lot of behavior problems of which feather-picking is the most common one. They are very social birds and in the wild would normally be in flocks.” She added that packaged bird food is very low on nutrition. They come with a high fat content which leads to heart disorders and complicates their hormonal make-up leading to stress. These and unpredictable changes in the bird’s environment like a change in the owner’s work hours or a new toy, could lead to obsessive compulsive disorders which are self-destructive in nature. Feather picking and self-mutilation are commonly seen and even when the environmental trigger for the problem is recognized and addressed, the behaviour often does not resolve itself. The clinic has seen cases where these birds have mutilated themselves to an extent that they would chew through their keel bone into their chest muscles.

While the nature of this disorder has been understood, its uniqueness offers very few solutions to the problem. Like humans, each bird is different and the same therapy cannot be applied to all of them. While some are given collars or sweaters to limit access to their chests, some are put on behavior-modifying drugs like Prozac. However, the success rate varies and doctors are unable to put a finger on any one promising solution to the behavior. Deborah, the technician on call for the day, mentioned that her cockatoo was put on acupuncture therapy. “It worked wonders for her. She was so relaxed after every session,” said Deborah.

As Dr Graham prepared to leave, she peeked into every cage in the office to ensure that the pets were in stable conditions. She left adding yet another day to the 11 years of experience she carried with her. As one of five double board-certified avian and zoological medicine specialists in the world, she exemplified a passion for a category of animals which most people would not associate as conventional pets. Walking out of the clinic, she waved out to Dr Connie Orcutt, the second of the two exotic animal specialists in the hospital.

According to the hospital website, Dr Orcutt has over 20 years of experience working with small mammals, reptiles and other exotic pets to her credit. She is also one of the only 11 board-certified doctors in Exotic Companion Mammal Practice. Her areas of specialistion include diagnostics and medical and surgical treatment.

Putting on her doctor’s coat, Dr Orcutt cheerfully greeted her technician Jenny and took into account the patients for the day. Her personal involvement and attachment to the animals in her care was demonstrated through the elated responses at improving cases and disappointing sighs at lesser-promising ones. She says that her job is a passion for her, even though the money is not as attractive as human medicine. “Human doctors may care for their patients, but we are in love with ours,” she said as she slipped on her gloves and walked out to greet her first exotic patient for the day.

Error: Twitter did not respond. Please wait a few minutes and refresh this page.